The following picture was taken a few years ago.  I think this represents us very well. 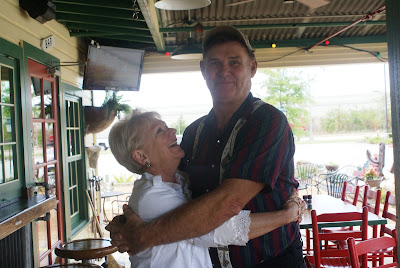 Don't know exactly where I'm headed with my story, but here goes.  My loving wife, as you will hear a lot from and about, is very important to my music life.  I like to explore the old songs of artists like Waylon Jennings, especially  the songs that were not great hits but were great love songs like Falling in or Out of Love.
Let me introduce my loving wife of 13 years.  Linda becomes my audience after I believe I've learned the song well enough to be comfortable playing in a jam session if available.  She is very patient with my progress. 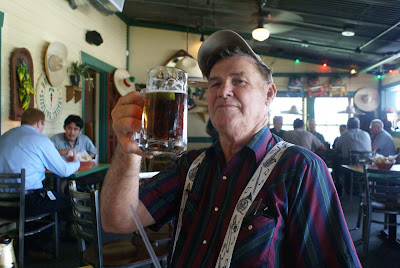 I do like my Shiner beer in a mug. 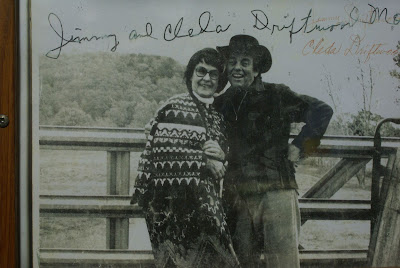 This is a picture of two of the nicest and most interesting people I have ever had the pleasure of meeting.It all started in the late 1980's  My grandchildren and I were going to Arkansas during the summer months and studying music.  My sister told me that my music hero, Jimmy Driftwood, was in Mountain View, Arkansas. She also told of meeting Jimmy and Cleda and what nice and friendly people they were. I included finding them in my plans for the summer .
In the interest of OLD TIMERS  like me, Jimmy Driftwood wrote: The Battle of New Orleans,  The Tennessee Stud and many other songs about the Civil War and about the history of the Great United States of America.  He told stories in song about the American Civil War, as the history of our great country, without favoring the North or South.  These were great stories in song about a great country that had some growing up to do and is still in the process of becoming even greater.
Jimmy Driftwood Morris was a school superintendent/ teacher and a master story teller.  He told me that he wrote the songs mainly to teach  his students history.  We spent a lot of time talking about folk music during the years I knew him. One could not tell easily which songs or poems he wrote and the ones he learned by studying folk music. I would have loved to have been his student during my college days. 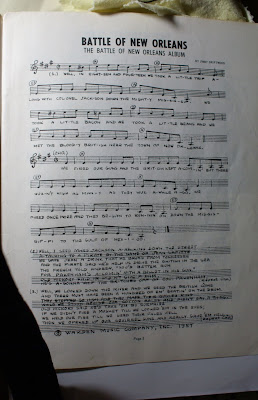 Jimmy Driftwood  won this award, "Song of the Year" for 1959.   As a young man interested in folk music, he influenced me greatly.  I still love folk, gospel and old time country music. 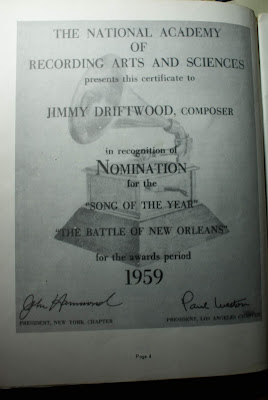 I regularly listen and study his voice and songs. As my friend, Jimmy Driftwood entered 88+ years of age I heard him play The Battle of New Orleans several times at the Jimmy Driftwood Barn Jam Sessions.  It was a great honor and experience.  My pleasure was shared by his audience and the wonderful people who shared the stage.

Thank you for visiting my blog!

Back in the Music Saddle Again

I know most of you think this is a real computer however to me It's a monster.   My "real" computer is in th... 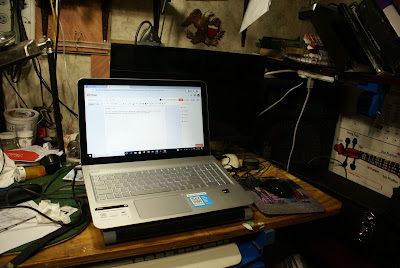 Louis Dean Chapman Sr.
I love to learn and rearrange old time Folk and country music. My interests consists of how the music came to be.